Looking For A Game-Changer?

In addition to their responsibilities in the library, many librarians also spend a substantial amount of time in the classroom. For those who tackle the incoming Freshman each year, teaching Information Literacy can be a sincere challenge. The difficulty is two-fold. How do you stay motivated and enthusiastic when you’re teaching the same material, asking the same questions and getting similar answers multiple times a day — year after year? We know if the instructor is not engaged, there’s little hope the students will be. Given that scenario, how do you instruct and prepare your students, many of whom don’t have much experience with libraries? How do you share the fundamentals that will help them with the entirety of their college careers and beyond? The answer might be… to put on your game face!

Emily Krug is an Instructional Services Librarian and Assistant Professor of Library Services at King University in Bristol, Tennessee. She shared with us her experiences as she created her game, The Battle for the Oval Kingdom, designed to introduce the concepts of Information Literacy. We’re inspired by her creativity and are thrilled to relay her story.

The Name Of The Game Is Innovation.

The first part of the equation is a teaching schedule that involves a lot of critical information to be shared in back-to-back sessions with 80 Freshman students in each. Complicate that with zero class transition time resulting in 45-minutes classes that are really 35 minutes. How do we make all that equal success? Shake things up. Come at the problem from a different angle. Don’t be afraid to try something new. Emily recalled, the origin story for her game, The Battle for the Oval Kingdom, came from the intersection of two exciting sources.

The idea for the game, The Battle for the Oval Kingdom, came because of a professional development day that I participated in through the Mid-Atlantic Library Alliance. For the spring 2018 meeting, we invited Tasha Squires, who is a middle school librarian in Downers Grove, IL. She had created a game as a winter reading program for her middle school students and had won an award for the game. She presented and gave us a basic structure for how we could create something similar.

The other influencing factor was a session at the Library Collective Annual Gathering in March 2018, which takes place in Knoxville, TN, every year. At that session, participants played a game by Matt Finch called “Battle for Library Island,” which was essentially a roleplaying game designed to help libraries think through strategic planning for library services. Add to these two inspiring professional development opportunities the fact that my husband and I are avid board gamers, you can see why building a game was something I wanted to take on.

Her goal was to build a game “…in such a way that students could complete most of it outside class but also compete against each other for prizes.” Emily knew she needed the game to

In 2017, Emily was looking into LibWizard because they wanted increased “flexibility and a cleaner look for their online instructional program.” Because they were already using LibGuides, it was an easy leap to add LibWizard to build tutorials for their online courses. When the game was forming in her imagination in 2018, she was already armed with LibWizard and decided to use it as her tool for the build.

Start With A Good Game Plan.

Emily thinks back to recall the creative process and said, 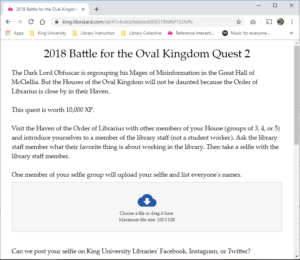 I initially built the Quests for the game using Forms because the Quests themselves were simple questions. Most Quests had a short paragraph themed on the game followed by some sort of activity that the students had to complete.

Most of the Quests used text boxes for answers, but one Quest that required the students to come to the library in small groups used the file upload field so that students could upload a selfie that they took with a librarian.

One thing I particularly liked about the file upload field was that it works really well on a phone, which was how most of our students were completing the Quests.

Knowing the usage habits of your participants is key and an excellent indicator of how committed Emily and the King University Library is to having a successful outcome for this endeavor.

Emily wanted the forms to be embedded as an iframe widget so she used more of her creative energy to devise a workaround iframe code to put the forms into their learning management system. 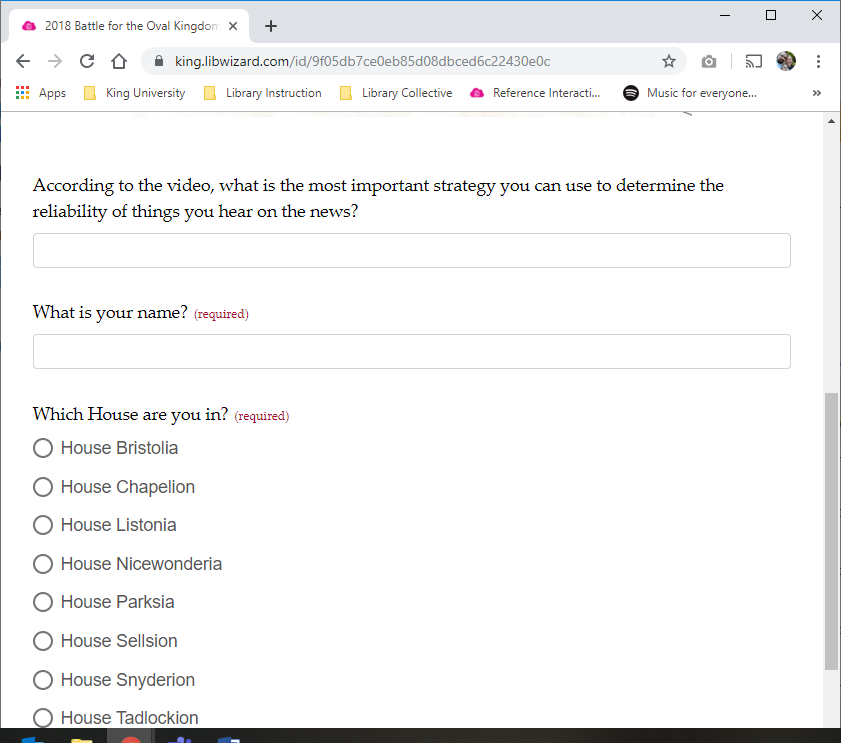 Part of what made it work is that it makes nods to things like The Lord of the Rings or Game of Thrones, but it’s not using those characters. I wrote a screenplay for a short video introducing the game, and I created characters and a mythology around the game. Our villain is a Sauron-esque warrior called the Dark Lord Obfuscar whose primary goal is to make it harder to evaluate information. The citizens of the Oval Kingdom seek the help of the Order of Librarius, who have discovered the ancient practices of evaluating information in a tome called the Codex of Bibliog.

The team names are all plays on buildings around campus. That’s one of the things that I think made it work: I tried to incorporate our campus as much as possible into the game. We had a lot of support in that regard. Our Director of Student Life was in the video, our Provost agreed to play the villain, and someone from our marketing department filmed and edited the video.

As far as advertising and implementing goes, we didn’t have to do much advertising because it was tied to a class. The students received a grade for completing the main Quests, but we built in the competition through other game elements such as strategy cards and bonus cards. The Dean of Students is in charge of the course, and he’s a former librarian, so he and his team were excited about us trying something a bit new.

More Than A Numbers Game.

The Battle for the Oval Kingdom is a success. Emily shared the fact that students who participated last year have already come to ask her if they will be playing the game again. And, while she did also get some great feedback from a short survey she distributed on the awards day, we know that the high level of student engagement she cultivated is invaluable. Emily reflects on her experiences as she looks to this year’s batch of incoming Freshman. There are some changes to the set up of the Freshman Seminar at King Univesity this year that meant more sections, which results in smaller class sizes but Emily continues with the game as a solid component of their teaching strategy. She said,

While we could have more easily managed the class sizes this year, we don’t have the staffing to add 10 extra instruction sessions in the fall semester, so we decided to continue using the game as our information literacy outreach for Freshman Seminar.

Several of the Quests are the same or similar to last year’s, but we did change a few big things. For starters, I actually moved the Quests from the Forms feature of LibWizard to the Quizzes feature because I found out about the certificate of completion feature in Quizzes and Tutorials. One important piece of feedback that we received last year was that students couldn’t always tell when they had completed each Quest because it would reload if they refreshed the page in the Learning Management System. By moving the Quests to Quizzes, I was able to include a customized certificate of completion, and the students can save that certificate in case there is any question about whether they did the Quest.

We also extended the time for students to complete the game. Last year, we did the entire thing over the course of a week and a half, which included the Labor Day holiday. One thing we heard from student feedback was that it felt rushed.

Imagine students wanting to spend more time working on what is essentially an assignment! But perhaps in all the fun, they’d forgotten that part. They’ve really done it at King University Library. Emily Krug and the teaching librarians have come up with a fun way to approach Freshman Information Literacy and the winner is… everyone.