Are you a Social Butterfly?

What are you saying? And how?

The minute you get out of bed, you have a new day and with it the opportunity to be social, if you choose to be. Though, perhaps, even your choice to keep to yourself all day and not interact with people is still communicating something. Previous generations tried to hammer home the recommendation that you should think before you speak.

Today, there are so many ways to speak to each other that we should be thinking all the time about what we’re saying and how. We can go even further to suggest that when and where should also be current considerations.

What about why? Well, the why seems to be the same reason throughout time. The why…is to connect. 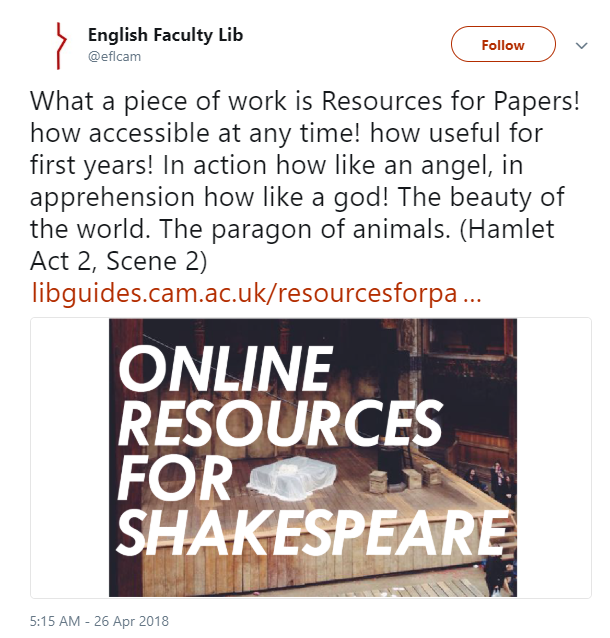 The idea behind social media is a really great one when you think about it. You read a good book and you fall in love with it. You tell everyone you run into about it. Excellent. But, now, you also have the option of tweeting about it, posting it on Facebook, shooting out the cover on Instagram, putting it on a Pinterest board, etc. You can share the love far and wide. It’s fun to share. But, what we’re talking about is a bit different — more about cultivating a social media voice. Coming up with a cool game plan and having an entertaining voice. We have some clients doing exactly that.

According to a Pew Research Social Media Fact Sheet, all age groups studied from March of 2005 to January of 2018 have shown a substantial increase in social media use. In the 18 – 29-year-old category, the numbers went from just 7% to 88%. So, it stands to reason that Academic Libraries would step up their social game. The English Faculty Library at the University of Cambridge sent out a tweet pointing their followers to a LibGuide they created on Shakespeare resources. They’re not the first to build such a guide, nor the first to publicize a guide’s existence via tweet. However, they took a great approach.

How much do we want to check out that guide?! Even more, how much do we want to go to that library and interact with those librarians? And, that’s the ticket. This whole action plan makes perfect sense, too. You’ve built these excellent LibGuides and crafted amazing LibAnswers FAQs. You’ve put together LibWizard tutorials and set up Events and Spaces in LibCal. Using Social Media to spread the news about them is a marketing strategy that boosts the usage of the stuff you’ve built and the resources you’ve included within them. Next, the challenge is to be creative.

The best way to connect is to listen. 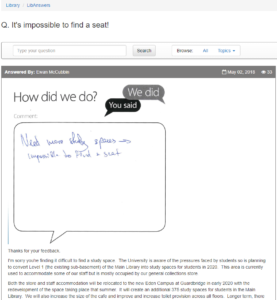 The University of St. Andrews Library is fearless and inventive in the way they interact with students. Like many institutions, they have a way for people to write out comments or provide feedback. What’s super is that they scan those comment cards and then create a LibAnswers FAQ out of it. Going the extra mile, they create a tweet with the original comment and then include a link to the FAQ with the complete answer.

Additionally, this helps to close the feedback loop. How often have you been solicited for your feedback, only to see it disappear into the ether and go…nowhere. Posting the actual comment cards, with the link to the FAQ demonstrates that solicited feedback was received, discussed, and responded to – even if that response is no. Points for being thorough!

Every interaction is an opportunity to show who you are.

In a Sprout Social report, it was discovered that — no surprise — people don’t like being ignored. What was surprising was how “…90% of people surveyed have used social in some way to communicate directly with a brand.” Apparently, “social surpasses phone and email as the first place most people turn when they have a problem or issue with a product or service”, according to Sprout’s consumer survey. The University of St. Andrews Library is clearly one step ahead as it takes paper comments and shares the questions and answers with its followers to reach as many people as possible. They’re being proactive in the Social Media world. No matter which channel your patrons choose to use to communicate with you, it’s always a good idea to be responsive.

The University of Liverpool Library saw a tweet, that by the admission of the sender, seemed to be a complaint that might not have needed such a public forum. But by using social listening, the library took the opportunity to connect and in doing so, showed not just that one person but all their followers how engaging their librarians are…even when the library wasn’t directly included in the tweet. 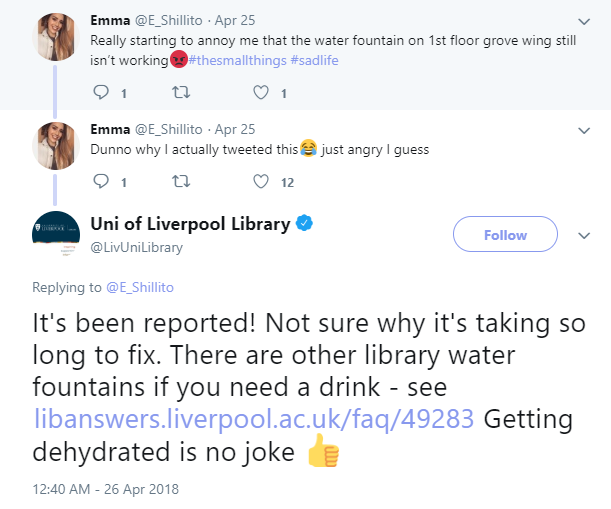 The library shows it’s listening, even if the outcome isn’t resolved, proactive listening goes a long way to alleviate customer issues. Then they present a LibAnswers FAQ that details the food and drink policy in the library and which identifies where the water fountains are. A spectacular example of the LibAnswers Platform’s ability to have staff entered FAQs come in handy. And to keep their presence light, they add in the bit about hydration – sure to put a smile on the face of their frustrated patron.

So, let LibGuides and LibAnswers do the heavy lifting for you. You’ve most likely created excellent content in there. Then pay attention to your Social Media channels for opportunities to interact with your patrons, link to the guides and FAQs that give them all the particulars they need.

Then enjoy your followers. Have fun with them. Be yourself. Make a connection.