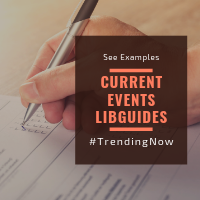 In our most recent newsletter, we talked about creating #TrendingNow content. To summarize, the most successful teaching sessions are based around an assignment, project, or task.

Context is key. And contextual learning leads to long-term learning.

That same concept applies when you connect learning resources with #TrendingNow current events.

Patrons are far more likely to deep-dive into a topic when the subject matter is topical, trending, and “hot right now”.

The U.S. mid-term elections are only six days away! The news cycle is 24/7 continuous coverage on this hot-button event. What better way to position the library as a leader in information-sharing that creating a topical LibGuide on the Mid-Term Elections.

What Other Kinds of Guides Can I Make?

#TrendingNow content doesn’t just have to be about the upcoming elections. Unfortunately, hurricane season is upon us and North America is seeing an uptick in the severity and frequency of hurricanes. Other areas have natural disasters to contend with too, like earthquakes, blizzards, and more.

If you’re in an area with hurricanes or other natural disasters, a Disaster Preparedness LibGuide is an effective way to communicate important information.

To illustrate, the East Baton Rouge Parish Library is the largest library system in Louisiana covering the capital city of Baton Rouge and the surrounding parish. EBRPL services a large community with nearly 350,000 card holders, 14 branches, and an annual circulation of 2.5million items. EBPL has 160+ active LibGuides and they receive roughly 150,000 hits to those guides annually. In 2016, their LibGuides were instrumental in providing resources for a struggling community. From their Disaster Assistance LibGuide to Coping with Traumatic Events LibGuide – these resources were invaluable to citizens. Watch EBPRL Librarian Andrew Tadman present at our 2016 virtual SpringyCamp conference on how their InfoGuides helped citizens during these trying times.

“During the 2016 flood, information was coming out over social media from different news outlets, kind of all over the place. And sometimes, it was contradictory information. So, we knew immediately we had to get a guide setup to create a one-stop resource of curated information. We didn’t want to overwhelm people by just putting every link possible that we could find out there. So we just to focus it on just what people need right now, what’s the most important things. There was lots of gossip and rumor about what you’re supposed to do, where you’re supposed to go, what you’re not supposed to do, including bad information about shelters, and incorrect information on documenting damage for FEMA. Additionally, information from the official city offices wasn’t getting out quickly enough. And that’s where the speed of LibGuides came in. We were able to get information up quickly, link to it on our library website, share it on social media, and disperse it. The mobile-accessibility was important to be able to access this information.”

Whatever LibGuide you decide to build, whether it’s on a patron’s chance of winning the 2018 $1.5billion combined lottery or on how the European Union’s Parliament works with Angela Merkel’s recent retirement announcement, add a #TrendingNow tag to your LibGuide.

Big thanks to Sally Stieglitz from Adelphi University for this idea! Sally’s created awesome LibGuides on #ThanksForTyping: Women’s Invisible Labor in Academia and Publishing, Fake News and Alternative Facts, and the 20th Anniversary of Harry Potter.

#TrendingNow guides can have a short shelf life, so use tags to organize them. Then, when they’re considered ‘old news’ simply remove the tag or consider unpublishing them to keep your guide list manageable.