Students at Boston College, with a little help from a librarian and her LibGuide, helped solve a mystery that began a century ago in a Chinese orphanage.

The students, undergraduates at BC studying history and art, were trying to determine what had happened to 86 intricately carved wooden models of Chinese pagodas carved in 1915 by boys at the orphanage under the tutelage of a German Jesuit and others.

The pagodas were brought to the U.S. for the Panama-Pacific International Exposition in San Francisco in 1915 and had gone from there to the Field Museum in Chicago. But their current whereabouts were unknown. 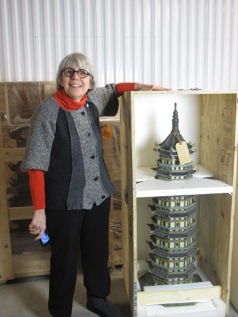 Adeane Bregman, head of the Bapst Art Library at Boston College, with one of the Chinese pagoda models she helped students to find.

BC Art Librarian Adeane Bregman was brought in to help the students with their research. Her classroom presentation, supplemented by a LibGuide, demonstrated research techniques and sources and ways to make connections.

Bregman used the LibGuide for her presentation. Afterward, it became her virtual presence. “It lasts when you leave,” she said. “It can be consulted. It led to vetted resources that helped the students not just to find the pagodas but to get a sense of their history and why they were important.”

“It made me feel good that libraries and what we provide are not dead yet,” Bregman told The Heights, the BC student newspaper. “We can still help people to work smarter and more efficiently.”

Eighty-three of the pagodas were eventually found in a warehouse in the Boston area. (They had been sold to a private collector.) Bregman was invited to go with the students to see them.

For more on this story, see “A Cultural Treasure Hunt” and “Treasure Hunt Ends in Boston” in The Heights. 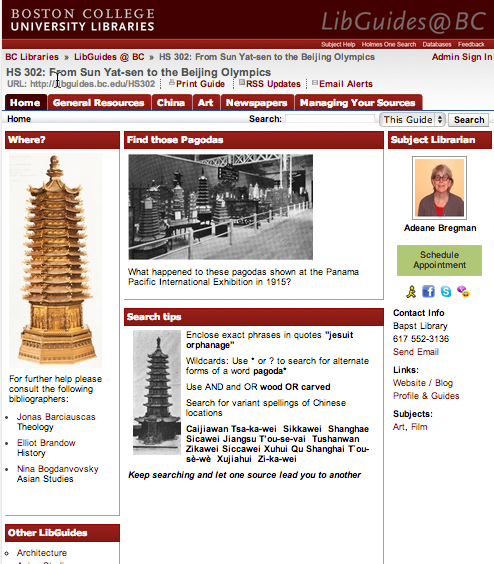 Use Springshare Tools to Meet Your 2022 Goals

Springshare Support Closed for the Holidays